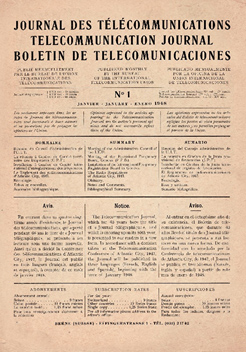 The first ITU conference following the Second World War – the International Telecommunications Conference held in Atlantic City in 1947 – aimed to develop and modernize the organization. One of the administrative changes was the adoption of French, English, Spanish, Russian and Chinese as the official languages of ITU, with French, English and Spanish to be the working languages.

Following these decisions on languages, the Telecommunication Journal became a trilingual publication (English, French and Spanish) starting in January 1948.  The texts for the three languages were printed in columns alongside each other.  Publishing the Journal in its new form meant a considerable increase in work and in cost of production, but the results were declared to be “satisfactory.”