In the twenty-first century, there have been a number of special issues published in conjunction with various ITU events.  Thematic issues have covered a large range of topics, including the evolution of third generation (3G) mobile communications, the advent of the “portable internet,” licensing in an era of convergence, the future of voice, sharing infrastructure to boost connectivity, the networked car, connecting people with disabilities, IMT-Advanced, mobile broadband, protecting children in cyberspace, biometrics and standards, and 3D television.

Throughout 2015, ITU News carried announcements and reports about activities and events at ITU and around the world to celebrate the Union’s 150th anniversary.  Special commemorative editions of the magazine were published in May/June and November/December. 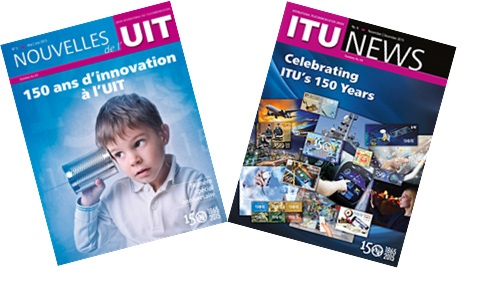 ITU’s 150th anniversary was celebrated in special issues of ITU News in May/June and November/December 2015.